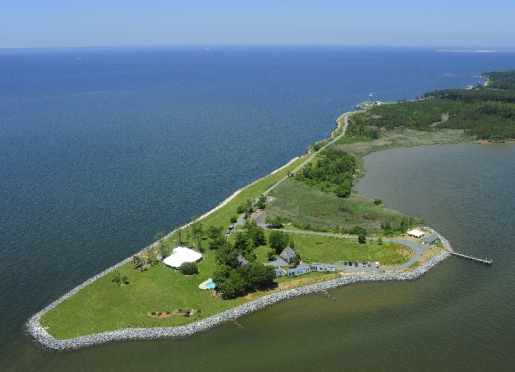 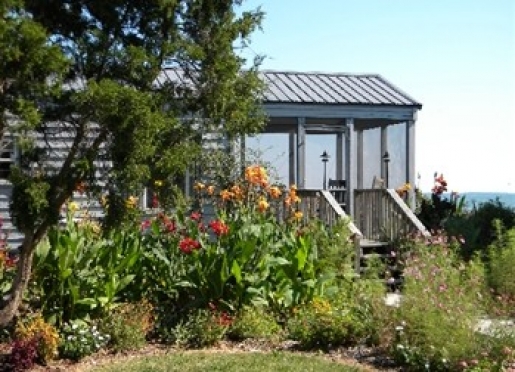 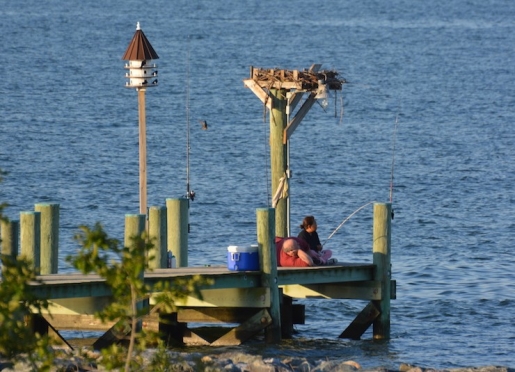 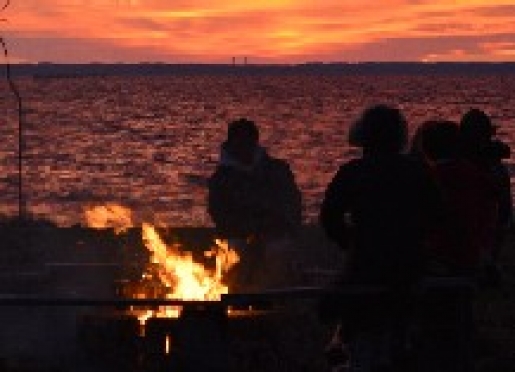 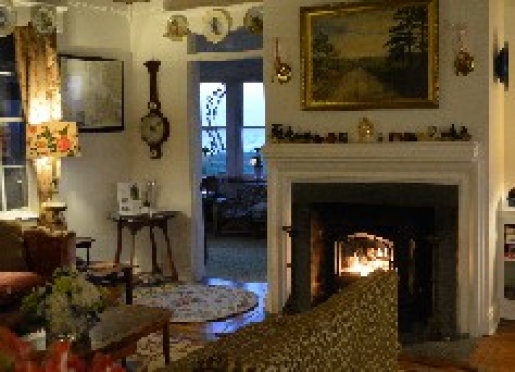 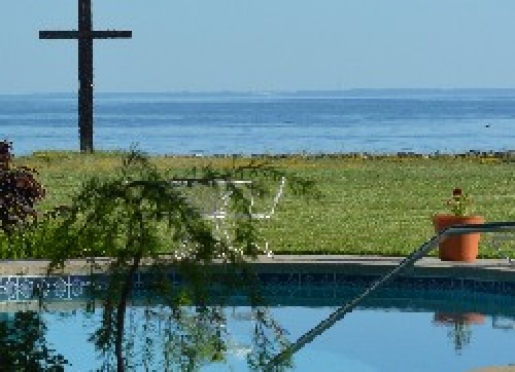 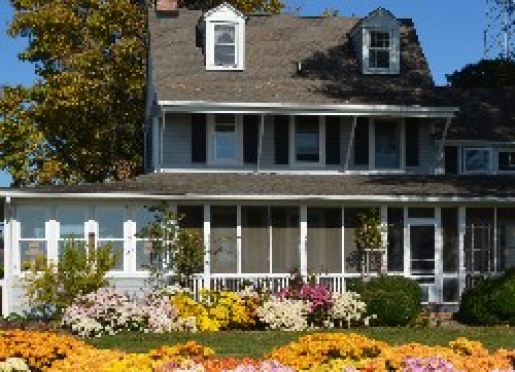 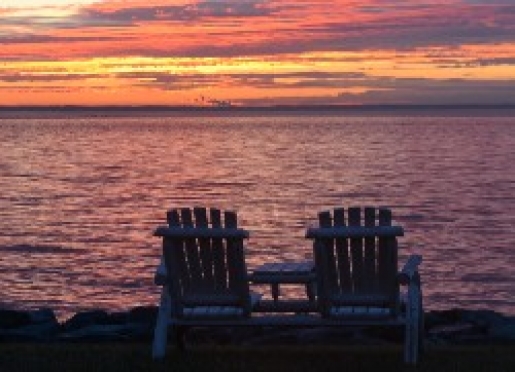 December 29, 2011
The mild winter has given us many quiet mornings warmed by the sun, and, with the shortened afternoons, the days have passed as a lullaby.  Of course there have been exceptions, most notably the past few days of crashing waves and flying spray more typical of life on the point during winter. But even so, the change was refreshing and cleared the last leaves of fall from the crevices of the great lawn. Now the grass can absorb more sun and some of the spring bulbs have already sent up testing green.
Tracy and I have also had a nice respite. After a trip to New Orleans we returned to Christmas with family. We are still enjoying the great collection of Dicken’s Village houses and figurines we acquired from Peggy, a friend of Henry and Scott’s of Two If By Sea Restaurant. Collected over 20 years, Peggy and her husband were delighted to keep their cherished keepsakes together and came to visit them at their new home here at the Inn. We also have a live tree to plant after New Years and had a wonderful Open House on Christmas Day. Now we are looking forward to planning for the weddings and many new guests in 2012.
Please visit us on Facebook for pictures of the house decked out for Christmas, and above all else, we wish you and yours a prosperous and blessed New Year!
Bob and Tracy

November 24, 2011
We have had a wonderful November. We had our last mow on a particularly chilly and windy day. But mostly the weather has been unusually calm with many mornings of lazy fog burning into sixty-degree days and light breezes. It has been so mild the lima beans made it to Thanksgiving morning, and they were a delight at the afternoon’s table. We were also blessed with Tracy’s Dad and Stepmom who visited for the first time. We have details in pictures on our Facebook page.
Earlier, wonderful guests from as far away as Whales to neighboring Queen Anne’s county have been through this month, but the migrating flocks have finished. Now mornings are filled with light oranges and yellows accompanied by the familiar whistling of duck wings hidden between the flat water and mist. The sun goes quickly now, making us all rush to the western lawn to catch the last blip of sun race behind the western shore. And it is moving toward the end of the point more rapidly. Once setting adjacent to the entrance fence, the sun’s arc seems to be speeding faster toward the cross, where it will disappear at the same latitude as the black pine in the southwest corner of the point.
And this brings me to a request we had this month. Invariably everyone asks about our most prominent feature and indeed, for us at least, the cross is the point, both literally and figuratively. We have told the story to many of you, but we thought we put it here, particularly as we thank God for all He said He would do, and what He has indeed done.
Tracy and I had heard various stories about the origins of how the cross came to be at the end of our sanctuary, and as we prayed for answers God sent us witnesses. We met the Hilmers the beginning of this past summer, who bought the property in 1976. They had recently joined a charismatic Catholic church in Baltimore. On Mr. Hilmer’s 33rdbirthday and because Christ died at age 33, Mr. Hilmer was led to drive to the end of route 33 (this property) and buy it. Later Mrs. Hilmer bought the statue of St. Francis (1 of 7) who still stands over the well cap. Sometime after the purchase of Black Walnut Point lumber washed up in the back cove laying in the configuration of a cross. The Hilmers took this as another miracle and told their church about it. The church came down, planted the huge cross at the end of the point and blessed it.
As an earlier confirmation of the Hilmer’s story, in the summer of 2010 we asked God about the history of the cross. The next day a Deacon and his Parish Coordinator from a Catholic church in Delaware were compelled to drive down to the Inn. They made it just before sunset and told us of the day the cross was erected and blessed. The Deacon had not been on the property since that time, but knew he had to come back. As the sun was setting that Sunday afternoon we got a bucket of water, joined hands and said a prayer. Then we blessed the cross.
By both the Hilmer’s and the Deacon’s account their church hosted revivals on weekends with upwards of 200-300 people. In the fall of 2010 a fellow named Pat came to visit to tell of his experience with these rivals, and he was quite an animated fellow:
"My wife went over to the Eastern Shore one time and came back speakin' in tongues and filled with the Holy Ghost. I looked at her in amazement and said, 'Honey, we're Catholic. We don't do that.' So I had to come on over here to this point an’ find out what was goin' on, and the same thing happened to me, praise Jesus!”
Pat went on to talk about the work he now does with Vets across the bay on the Western Shore.
As for the rest of the story, the revivals went on for many more years, so much so the Hilmers gave the property to their church in the early 80's. Years later the property became owned by Peter O'Malley (no relation to the Governor of Maryland) who was a lawyer. His partner came back to visit this past summer to fill in the last piece of this most recent history. He said it was Peter who got the state to take it over and Tom and Brenda Ward turned it into the Inn in 1989.
Tracy and I were led here in the summer of 2007 and took over in July of 2010 - but that is another story... Suffice it to say that GOD is Good and HE has blessed this sanctuary.
We hope you had a very thankful Thanksgiving, and we thank you all for sharing in our blessings here at Black Walnut Point.

Fall is officially here, even though we had a little bit of November for two of our weddings in September. They were physically chilly, but wonderful and everyone had a great time, especially Tracy as his new role as the one to say, ‘Dearly Beloved’. He thought he would never hear himself say that and yes, he did laugh, but he thought of Prince (or the artist formally known as Prince) and went on with great panache. His leaning analogy when riding a motorcycle with your partner was not only accepted, but prompted the crowd to chant, ‘Lean, lean, lean,’ at the reception.
The butterflies finally made it last week. They had a tough year with the drought in Texas, but they arrived in the hundreds last Wednesday. See our FB page for details… But it reminded me that the year has been unusual… Let’s see, we had the tornado in June, then we didn’t have to mow the lawn until the earthquake, and then we had Irene and then Lee. But all in all it has been a wonderful season. We have definitely had wonderful guests, and Allegra and Carey’s wedding was an appropriate end to the fall wedding season with their entrance by sailboat for the weekend and by canoe for their actual wedding.
The paintings, lamps and other great stuff we got from Mom-Mom and Pop-pop’s house look great in the Inn. Somehow the living room colors all match and seem like they were planned, even though the pieces come from two different families, seven decades and several states. And the new hot tub will be up and running next week, the main reason we made the trek to Maine. We had a pleasant sail on my almost 110-year-old Only Sister from Friendship to Rockland, and I had never experienced hauling her out.
Now Tracy and I are looking forward to winter. We already have friends calling from last year and revisiting from the spring… Aleecia was convinced it was Tracy’s prophesy that she is now indeed pregnant, but somehow we think Mike had more to do with that. The fall winds are full of sharp-shin hawks and we saw a dozen bald eagles in conference about a half-mile above the marsh last weekend. A golden eagle stood his ground on the west bulkhead for all of Thursday, but we haven’t seen him back since then. The weather warmed up but is now unsettled, much like the spring was. But the fireplaces have already been fired from the cold snap last month, so we’re ready and waiting to see what’s next.
Bob, of Bob and Tracy