From THE INN AT ORMSBY HILL 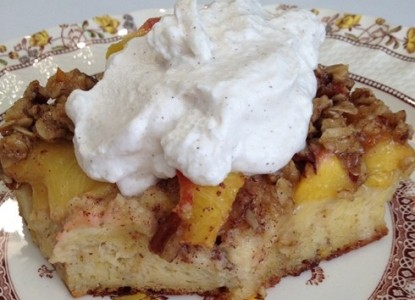 1. Coat a 9x13 baking dish with butter or Pam.
2. Cut the bread into slices and then 1 inch cubes. Layer in baking dish.
3. Scatter the peaches over the bread.
4. Combine eggs, half & half, sugar, vanilla, and cinnamon in a blender until frothy (about 10 seconds). Pour the mixture evenly over the bread.
5. Beat the butter, sugar, agave nectar or corn syrup until creamy. Fold in the pecans and oats, mixing just until combined.
6. Spread the topping over the peaches and bread.
7. Cover with foil and refrigerate overnight.
8. Bring the dish to room temperature( about an hour),and preheat the oven to 375°.
9. Place the dish on a baking sheet to catch any drips, and cook with the foil on for 40 minutes. Remove the foil and bake for another 20 minutes. Let the streusel sit for 10 minutes before cutting.
10. Whip the cream, rum, and cinnamon together with a hand or stand mixer. Dollop on top of the warm streusel.