From THE MAPLE LEAF INN 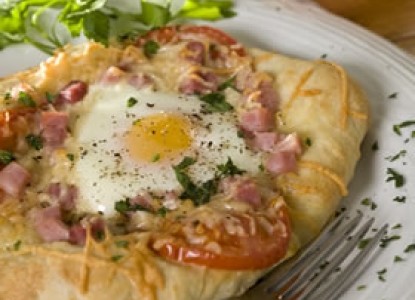 I usually use the topping listed below – occasionally using bacon instead of the ham. You can use anything you like – the trick is to keep it light and not overload the crust.

To make the crust, put the flour, salt, and yeast in a food processor fitted with the dough blade and pulse several times to mix. With the processor running, add the tablespoon of oil through the feeding chute. Then add the water in a stream until a soft ball forms – you will typically not use the entire cup. Stop the processor and move the dough to a floured surface. Knead a couple of times and then form into a ball. Put the dough in a small oiled bowl and cover tightly with plastic wrap and put in a warm place to rise for one and a half to two hours – until doubled. About an hour before baking the pizzas, preheat the oven with a pizza stone to 480 degrees.

When the rising is done, take the dough from the bowl and place it on a lightly floured surface. Cut into four equal portions and form them into tight individual balls. Put a little olive oil on each and lightly cover with plastic wrap. Let them rest for about 10 minutes.

When ready to form the pizzas, take each ball and gently pull it into a small round crust. Then, place on parchment paper. Dimple the crust with your finger tips and using the heel of your hand, push the crust into a larger circle with the outer edge a bit higher then the middle – each crust will be approximately six inches in diameter.

Brush a little olive oil on each crust and sprinkle the diced ham on each, leaving an empty spot in the middle of the crust. Place three tomato slices on top of the ham. Then sprinkle the cheese on top of the ham and tomatoes. All these ingredients should form a dam to hold the egg in place. Place the parchment with the pizzas the preheated stone and slide a raw egg into the middle of each pizza. Bake for about 8-10 minutes – until the egg whites are set and the crust turns a golden brown. Remove from the oven, and slide onto a plate and serve while hot.