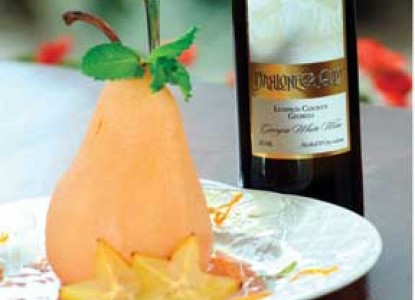 1 cinnamon stick, broken in half

1. In a large saucepan, combine the sugar, wine, water, orange and lemon zests, cinnamon stick and vanilla bean and bring to a boil, stirring to dissolve the sugar. Peel pears. Set the pears in the syrup, stems up, and simmer over moderately low heat until tender when pierced with a knife, about 20 minutes. Using a slotted spoon, transfer the pears to a large dish to cool.

2. Strain the syrup into a medium saucepan. Boil over moderate heat until the syrup thickens to the consistency of maple syrup. Let cool to room temperature, then refrigerate until chilled.

3. In a small bowl, whisk 1/4 cup of the reduced syrup into the mascarpone and chill. Using an apple corer or teaspoon, core the pears but not all the way through. Leave the top and stem undamaged.

4. In a large bowl, beat the heavy cream until stiff peaks form. Fold in the chilled mascarpone. Spoon the cream into a pastry bag fitted with a medium star or plain tip. Stand the pears on a platter and pipe the mascarpone cream into their centers.

5. Spoon a heaping tablespoon of the Caramel-Wine sauce onto each of 8 dessert plates. Set the pears on the sauce and spoon a little more sauce over each pear. Pipe the remaining mascarpone cream around the pears and serve. We also poke a little hole in the top of the pear next to the stem and place a mint leaf in the hole. Looks just like a fresh pear leaf.